We are pleased to present our seventh annual Career-Launching Companies List. By being part of a very successful company early in your career, you build a halo that not only leads to faster upward growth, but greater financial rewards as well.

By being part of a very successful company early in your career, you build a halo that not only leads to faster upward growth, but greater financial rewards as well. That’s important to us as your financial advisor because choosing the right job can add far more to your ultimate net worth than making good planning or investment decisions. For a complete explanation of our logic, we encourage you to read the post that accompanied our original list.

To qualify for our list of mid-sized companies with momentum, a company must be privately held, have a revenue run rate by year end of between $20 million and $300 million, be on a trajectory to grow at a rate in excess of 50% for at least the next three or four years, and have compelling unit economics. Selling a product at very low margins can lead to rapid revenue growth, but it doesn’t necessarily imply a great long-term business.

Despite the turmoil in our financial markets, 2018 was a boom year for our list of young tech companies. The total number of IPOs and acquisitions were at all-time highs — and by a wide margin. But the even better news is the number of companies added to the list was also near an all-time high, which means the number of compelling opportunities is by no means shrinking. Tech is still a great place to launch your career.

This year’s list includes 156 companies, up 11 from last year’s 146. We added 48 new companies, which is the second highest total in our seven year history. We dropped 38 companies, which includes 12 that went public, 10 that were acquired (half of which were acquired for more than $1 billion), 4 that grew beyond the $300 million revenue cap, and 12 that experienced growth that was too slow to continue to qualify (approximately the six-year average). 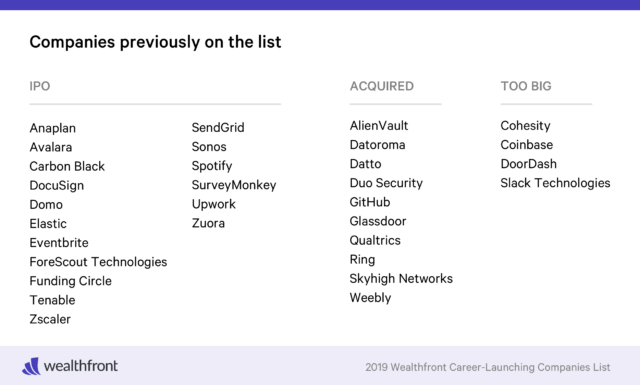 This year’s 10 IPOs increased significantly from last year’s paltry 5. In addition, another 6 companies that were previously on our list went public. There were 12 company sales, half of which received offers of over $1 billion. Finally, we once again had a very small number of drops from the list due to slowing growth relative to previous years. 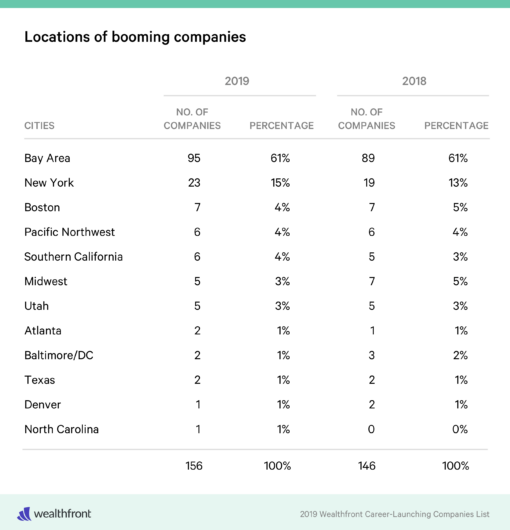 A few geographies gained slight share this year, but generally speaking the relative market shares remained approximately the same. While other geographies may be experiencing an increased level of startup activity, it still appears that the more successful companies are likely to be based near Silicon Valley. This means you should seriously consider moving to the Bay Area to launch your career and then consider moving home to start your own company once you’ve gained the halo and experience.

Your career matters to your financial future

We hope you find this year’s list helpful. If you are an engineer, we provide slightly different advice, which can be found on our engineering blog. No matter what your background, we believe this list can help young professionals looking to rapidly grow their careers. And once you’ve achieved some success, we hope you will consider using Wealthfront as your financial advisor.

Planning 4 min read
The 2020 Wealthfront Career-Launching Companies List
Today we are pleased to present our eighth annual list of information technology companies where young people should start their careers. Many people ask us why a next generation banking service would go to the trouble of publishing this list. Our objective is to help our clients manage their short…

Planning 4 min read
The “What-If Fund” — What It Is and Why Every Woman Needs One
You can look at your emergency fund and think of all the bad things it might one day give you the ability to escape, but you can also look at the money and imagine what opportunities or big ideas it might allow you to say yes to.

Saving 1 min read
Wealthfront’s Guide to Equity & IPOs
As companies like Airbnb, Lyft, Pinterest, Slack, Uber, and others gear up for multi-billion-dollar IPOs this year, we know that employees are often left with more questions than answers about their equity compensation. We collected our most popular advice on valuing equity, exercising options, selling stock, and managing a windfall into a comprehensive Guide to Equity & IPOs.