The Battle of the Tuition Bulge

When we decided to add college planning to our automated financial planning, the most comprehensive service of its kind from an automated advisor, we did a deep analysis around the actual projected costs of college to help families better prepare. Today I’ll share some of the important insights we’ve surfaced to help families beat the high cost of college.

First, some bad news: college is ridiculously expensive. Right now the all-in price for tuition, room and board at state universities averages about $23,000 per year, and the average price for a private four-year college is about $45,000 a year. But those costs will keep going up. In fact, you can expect these costs to rise about 1.1% faster than inflation. However, we take that into consideration with our advice engine, Path. Our projected rate of inflation changes daily (see this post about inflation forecasts). For example, today (the date of this post) the inflation forecast is 2.1%. With our +1.1% consideration for college, that results in a 3.2% projected inflation on future college costs. That means your total future costs could be about 76% higher than today by the time your newborn child turns 18!

Okay, now for some good news: it’s possible to build a remarkably big college fund – tax free – if you start early. Even modest monthly contributions to a 529 college savings account will add up to a lot over the years. Setting aside just $200 a month — assuming a return of 4% annually — over the course of your child’s life can yield $63,600 by the time she turns 18. This is the power of compounded returns. However, the rising costs of college still leave a lot for you to cover out-of-pocket. Thus, putting away more every month will enable you to keep closing the gap — but that can still feel daunting.

The even better news is that the actual out-of-pocket costs of college are much lower than the exorbitant sticker prices suggest, thanks in large part to available financial aid. It’s true that the cost of tuition today can run north of $50,000, and will only continue to increase substantially in the coming years. However, financial aid — meaning grants and scholarships, not student loans — has climbed even faster than tuition over the past 20 years. There are now more pools of money available to everyone, not just students from low-income families.

In fact, financial aid can be so substantial that many elite and extremely expensive colleges can turn out to be surprising bargains. For example, at Princeton University the full cost of tuition and room and board is currently about $67,100 a year.  But according to data from the U.S. Department of Education, the average Princeton student’s out-of-pocket cost after financial aid is just $7,100 a year. For context, that’s less than what some students will pay at their respective home state public universities.

State universities also offer financial aid that reduces their costs. The average financial aid package at these state schools is $8,500. However, the costs have climbed rapidly over the past two decades. Between 2000 and 2015, average tuition and fees for in-state students at public universities nearly tripled from $3,471 to $9,468. For out-of-state students, those costs more than doubled from $9,964 to $22,822. 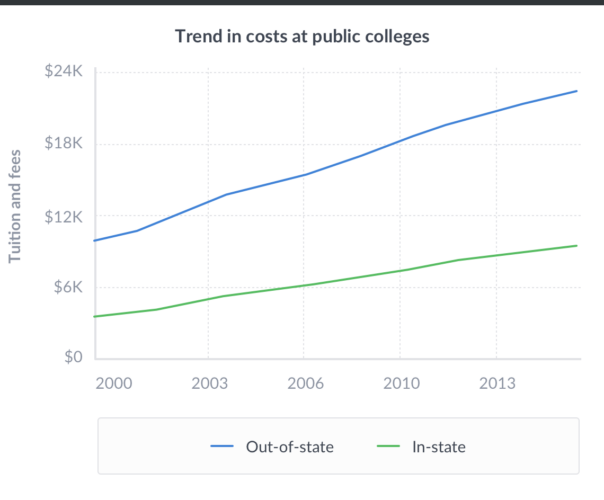 Source: IPEDS and calculations by the author, statistics weighted by the number of students

For out-of-state students, the costs of state universities easily rival those of elite private colleges. At the University of California-Berkeley, tuition and fees for students from outside California now tops $38,000 a year. And because these fees help plug funding shortfalls, state universities have sharply increased their acceptance of high-paying non-resident students. In the University of California system the number of non-resident students has shot up 82% from 2010 to 2015.  At UC-Berkeley, arguably the system’s most selective campus, 24.4% of the students now come from out of state. But while that might seem like a lot, it’s actually below the national average of 27.9%. For instance, at the University of Alabama out-of-state students make up more than 50% of the student population.

Show Me The Money

While there is more financial aid available overall, the biggest challenge is that it varies widely from one college to another, and those differences can have a huge impact on how much you’ll be responsible for paying out-of-pocket. For example, among private four-year colleges the average financial aid package at schools in the bottom quartile for “generosity” is less than $13,000 a year. By contrast, the average package for those in the top quartile is above $25,000. That’s a big swing. 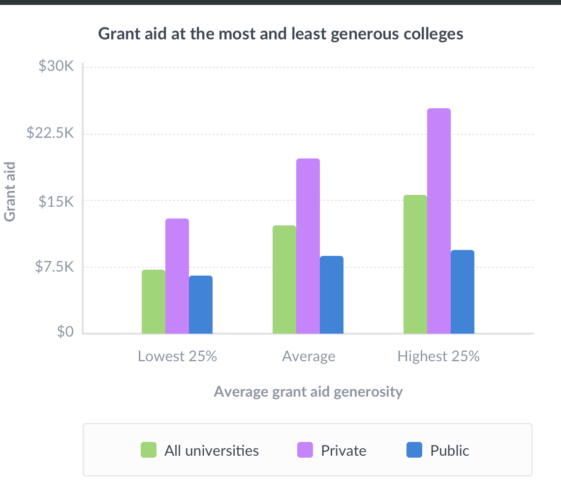 Source: IPEDS and calculations by the author, statistics weighted by the number of students

It’s also difficult to gauge if you make too much money to qualify for financial aid. However, it’s important to know that many institutions provide aid to students from solidly middle-income families. For example, Stanford essentially waives tuition (minus room and board) for all undergraduate students from households with annual incomes below $125,000. Further, the average tuition (net of aid) at the University of Pennsylvania has actually declined in real terms over the last ten years. Similar to Stanford and Penn, other elite, private universities are well positioned to be more generous with financial aid, so you shouldn’t assume private schools are always more expensive.

If your child is enrolling in college today you should expect to pay about $14,500 out-of-pocket for an in-state college after financial aid, and about $23,000 for a private college after financial aid. But averages only tell you part of the story, and today’s out-of-pocket prices will vary greatly from what you’ll be on the hook for many years down the road. Thus, trying to figure out how much financial aid you’ll qualify for by school and when you’ll need it is quite challenging. But this is where our automated financial planning does the heavy lifting. We include future projections on financial aid for almost any college your child might want to attend. Those projections are based on both your family’s financial trajectory and the financial aid patterns of the particular institution you are contemplating.

However, despite the sophisticated calculations the gap to close might still be large. Thus, it’s entirely reasonable for many parents to assume that student loans will be part of the plan. And just like planning and saving early for college, parents should also start thinking early about creative strategies to reduce college costs, such as commuting to college from home to reduce the rising costs of room and board.

Parents should also remember that they don’t necessarily have to shoulder the entire burden themselves, especially if it means sacrificing their own retirement plans. The reality is that many families simply cannot finance the full out-of-pocket costs of college, especially when there are multiple children in the home. And that’s okay. We strongly believe that parents should carefully weigh the tradeoffs between saving for college and saving for their own retirement — both are equally important.

But that doesn’t mean the dream college is an impossible dream. Starting early and selecting an investment plan that generates returns that at least keep pace with the rising costs of college is an important first step. Getting a head start on understanding the nuances related to financial aid will also give you a better perspective of what’s actually possible.

Nothing in this communication should be construed as tax advice, a solicitation or offer, or recommendation, to buy or sell any security. Financial advisory services are only provided to investors who become Wealthfront Inc. clients pursuant to a written agreement, which investors are urged to read carefully, that is available at www.wealthfront.com. All securities involve risk and may result in some loss. Wealthfront Inc.’s financial planning services are designed to aid our clients in preparing for their financial futures and allows them to personalize their assumptions for their portfolios. Wealthfront Inc.’s free financial planning guidance is not based on or meant to replace a comprehensive evaluation of a Client’s entire financial plan considering all the Client’s circumstances.  While the data Wealthfront uses from third parties is believed to be reliable, Wealthfront cannot ensure the accuracy or completeness of data provided by clients or third parties.  Graphs and other images are provided for illustrative purposes only.For more information please visit www.wealthfront.com or see our Full Disclosure.

Path projects your child’s college costs based on current college costs as provided by the Integrated Postsecondary Education Data System (IPEDS) of the U.S. Department of Education. Path applies projected annual inflation to the current college cost for every year between now and the year your child is expected to enroll (when they turn 18, or current year if they’re currently older than 18).

Path projects the financial aid your child may be eligible for when they turn 18, or current year if they’re currently older than 18. This is a projection only. The actual financial aid offered to your child at the time of attendance may differ from our projection.

Path assumes your projected income and account balances for accounts associated with your other goals, such as retirement, in the financial aid formulas (both FAFSA and Institutional Method use income and assets in the estimate). Path uses your current reported income as a baseline level, and projects your annual income across different ages according to the life-cycle profile of earnings in the Current Population Survey. If you are already retired by the time your child is projected to attend college, then Path uses projected distributions from your accounts to project your income.

For additional information on our methodology, please see: https://www.wealthfront.com/path/disclosures

5 min read
Saving for College: 4 Big Questions Every Parent Needs to Consider
It’ll cost an estimated $302,700 to send today’s newborns to a four-year private college, according to Wealthfront research. Here's what you need to think about today if you have kids who may be college-bound in the future.

6 min read
Saving for College: How ‘Superfunding’ Could Supercharge Your College Fund
You can fund a 529 account with up to five years of contributions at once. This feature, called superfunding, is a powerful tool in preparing for your child’s college expenses.

8 min read
Saving for College: How to Choose and Fund Your First 529 Account
Because of their superior tax benefits and relative flexibility, most experts consider 529 plans the best way to save for college. Here's why.