The Surprising Value of Social Security

While young people tend to regard Social Security as a source of only miserly payouts – and one with an uncertain future to boot – it can in fact represent a significant portion of your income after you’ve retired. That means that even if you are still in your 30s or 40s, you should take Social Security into account when deciding on your lifetime financial plan.

Unfortunately, that’s easier said than done. Optimally incorporating  Social Security into your financial plan, especially determining at what age you should begin taking benefits, requires complicated financial analysis beyond the skills of most people or publicly available Social Security calculators. The good news is a new breed of software is available to do that thinking for you. Our advice engine, Path, suggests optimal Social Security strategies without having to specifically ask about it, in addition to addressing many other planning issues. Free for clients, it’s another example of our core belief that Software is Better Than People.

Most people understand that even though you can begin claiming Social Security benefits at age 62, it’s better to wait, because you’ll be entitled to bigger monthly checks if you do. Here’s a short primer to show how the system works.

Your benefit is based on your average covered salary over your 35 highest earning years adjusted for inflation using the Average Wage Index (AWI), a national measure of wage inflation in the United States. Your benefits (assuming you retire at age 66) are calculated as follows:

For example, if your average real covered salary were $90,000 then you would qualify to receive $30,545 per year if you retire at 66. Considering all the caps in salaries for a 66 year old in past years, and adjusting for AWI inflation, the maximum annual benefit a 66 year old can receive in 2017 is $32,244.

There’s an important wrinkle to this formula – one that introduces considerable complexity into decisions involving Social Security. As mentioned, the program has built-in incentives designed to encourage you to delay claiming benefits. You’re penalized if you claim them early, and rewarded if you wait. Specifically, someone born in 1950 only gets 75% of the full age benefit if she begins claims at age 62, but gets 132% if she waits until age 70, the longest anyone can wait (the exact numbers change depending on your birthdate, but follow the same general pattern).

That means for every year you wait to start getting your Social Security checks after age 62, your payments increase by about 7.3%. Another way of thinking about this is for every dollar you would receive if you start claiming benefits at age 62, you would get at least $1.76 (132%/75%)  plus inflation if you delayed until age 70. Investors in financial markets would kill for a guaranteed return in excess of 7.3%.

Another measure of these benefits is what economists call their “present value.” That’s equivalent to the lump sum you would need to invest today in order to make withdrawals in future years exactly equal to your Social Security benefits. To compute present value, you need to make an assumption regarding the return you could make on an investment with a risk similar to that of the Social Security benefit. Since Social Security is guaranteed, the best comparison would be 30-year U.S. Treasury Security. These are extremely low-risk investments, and produce a return that is currently approximately 3% per year. As Social Security benefits are adjusted for general inflation, we also need to take that into account in our present value calculation. Currently the market based expectation for inflation over a 30 year horizon is 2.1% (for more detail on market based inflation expectations see How to Forecast Future Inflation Rates).

Let’s go back to our previous example of a 66 year old with an annual benefit of $30,545. Were this client to live until age 85, the present value of her Social Security benefits is $562,752 . Were the client to live five more years, to 90, the present value jumps 22%, to $688,671. That’s a lot of money – far more than many people realize, which is indicative of the manner in which Social Security is under-appreciated as a source of retirement income.

There is only one instance in which it makes sense to claim benefits early. To be candid, it’s not the most pleasant situation to contemplate: That, on account of poor health, you don’t expect to live much past 75. In that case, it makes no sense to wait for extra monthly benefits, since you won’t get them for very long. You’ll collect much more if you claim your benefits as soon as you can, even if the monthly checks are smaller than they’d be if you waited.

So what does this all mean for my retirement plan if I’m in my 40s? Consider a pair of married 40-year olds making a salary of $100,000 each with an expectation of living until age 85. If both plan to claim Social Security at age 62, they would receive combined after-tax monthly benefits of $2,420 (assuming they lived in California, where benefits are exempt from state taxes).[1] But if they wait until age 70, the figure grows to $4,400. Suppose the couple plans monthly retirement spending of $10,000. If they retire early only 24% of that sum is funded by Social Security, compared to 40% if they wait. That means if the couple wants to retire at 62 with their chosen lifestyle, they are going to have to start saving more, since Social Security won’t be taking up as much of the slack.

And For You Social Security Skeptics

It should be clear by now that Social Security has the potential to be a meaningful source of income in your retirement. Although the majority of our clients choose to incorporate Social Security benefits in their Path based financial plan, younger clients tend to be more cautious about it. The chart below makes that clear; a little more than a third of our clients in their 20s choose not to assume that 100% of the current Social Security benefits will be available to them when they retire – in other words they assume the program will play a diminished role in their “Golden Years.” Indeed, Millennials are often heard to lament that “Social Security won’t be there for me when I need it”. Not surprisingly, the closer you currently are to retirement the more likely you think Social Security will be there in full. 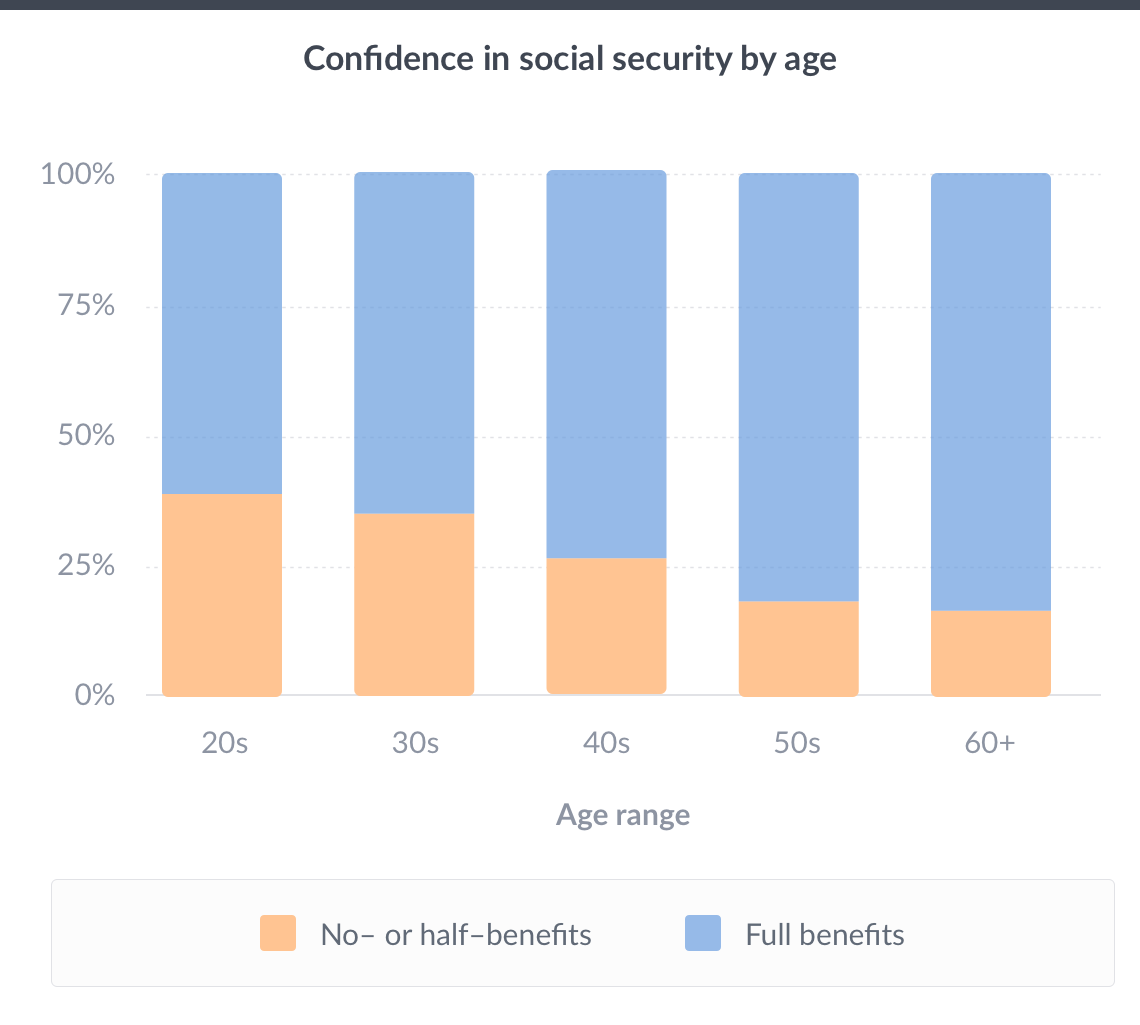 Figure: Fraction of Path users across different age groups that choose not to incorporate full Social Security benefits (salmon) in their financial planning experience. Statistics based on proprietary Wealthfront data as of March 2, 2017.

While no one can predict what the country, or the world, will be like in three or four decades, it’s safe to say that Social Security is one of the federal government’s most popular programs, with decades of strong bi-partisan support behind it – and is likely to be retained in some form. Regardless of your views on Social Security’s future, there is no disputing that delaying the claiming of benefits can meaningfully increase your payout. That means if you are skeptical that Social Security will be there for you when you retire, it should be even easier for you to “Do the right thing” and delay claiming benefits. If it turns out Social Security goes away, as some doomsayers predict, you will have lost nothing. But if it is still around, you will come out ahead, by a significant amount.

Software Solves the Problem For You

In our automated financial planning, our advice engine handles all the complicated trade-offs between claiming your Social Security benefits at different ages. Then it automatically sets the optimal Social Security claim age considering your particular retirement goals. Our automated financial planning works whether you are a Social Security skeptic or a true believer, since you can have it play as large or as small a role in your retirement as you choose. And you can have it all in a free app on your mobile phone! While we can’t guarantee that our financial planning experience will make you richer, we can say with complete confidence it will at least make your life easier.

[1]Path uses your current income and national averages on how income changes over the working life to project your salary history. Path also assumes caps and bend-points on social security benefits are adjusted by projected inflation (2% as of February 2017). The projection also assumes an Average Wage Index (AWI) of 0.58% per year higher than inflation into the future. The AWI is the inflation measure used by the Social Security Administration to correct past annual paychecks. For someone born after 1960, the full retirement age is 67 year old. Also, the effects of claiming earlier or delaying are slightly different: the benefit if you claim at age 62 is 70% of the full retirement age benefit and the benefit if you delay claiming to age 70 is 124% of the full age benefit.

Nothing in this blog should be construed as tax advice, a solicitation or offer, or recommendation, to buy or sell any security. This blog is not intended as investment advice, and Wealthfront does not represent in any manner that the circumstances described herein will result in any particular outcome. Graphs and other images are provided for illustrative purposes only. Our financial planning services were designed to aid our clients in preparing for their financial futures and allow them to personalize their assumptions for their portfolios. We do not intend to represent that our financial planning guidance is based on or meant to replace a comprehensive evaluation of a client’s entire personal portfolio. While the data Wealthfront uses from third parties is believed to be reliable, Wealthfront cannot ensure the accuracy or completeness of data provided by clients or third parties.

Hypothetical calculations are provided for illustrative purposes only. Hypothetical performance is not an indicator of future actual results. The results reflect hypothetical performance and do not represent returns that any client actually attained. Hypothetical results are calculated using a model constructed on the basis of historical data and based on assumptions integral to the model which may or may not be testable and are subject to error. Hypothetical performance is developed with the benefit of hindsight and has inherent limitations. Specifically, hypothetical results do not reflect actual trading or the effect of material economic and market factors on the decision-making process.  There is a potential for loss as well as gain that is not reflected in the hypothetical information portrayed. Investors evaluating this information should carefully consider the processes, data, and assumptions used by Wealthfront in creating its simulations.

Investment advisory services are only provided to investors who become Wealthfront clients. For more information please visit www.wealthfront.com or see our Full Disclosure.

3 min read
How Millennials Are Thinking About Their Finances During COVID-19
Much has been written about millennials and money – this generation came of age during the Great Recession (which began in late 2007 and lasted into 2009), and now they’re facing another economic downturn as relatively young adults. At Wealthfront, we build our products and services for millennials. In…

4 min read
Tips for Managing Your Finances After Job Loss or Wage Loss
Over the last seven weeks, more than 33 million Americans have filed for unemployment. Many more have had their hours or their pay cut at work. Dealing with the loss of wages or your job can be incredibly stressful – I was laid off in 2008 during the financial crisis,…

6 min read
What You Need To Know About Tax-Loss Harvesting
We don’t need to tell you that global markets have been extremely volatile lately. This can be stressful, especially if you’re checking your portfolio more than usual. There is a silver lining, however. Market volatility presents an opportunity to generate tax losses to offset your taxable gains through a time-proven…