Buying on the Dip

Over the past five years we have written numerous posts to try to convince our readers that timing the market doesn’t make sense. We’ve provided data that proves the average retail investor loses a significant amount of money from doing what feels right: buying when the market rises and selling when it declines. The good news is that the message must be sinking in, as we’ve seen an uptick in inquiries to our client service team asking whether they should wait to invest more until the market goes down. In theory this makes great sense, but in reality it’s extremely difficult to execute. So today we’ll help spell out the challenges of “buying on the dip.”

How Low Can it Go?

So how do you know at what point to invest when the market declines? Unfortunately you can’t tell with any certainty when the market is likely to hit bottom. For example, you may have thought that September 2008 was the “dip” on which to buy, but in fact the market continued to decline another six months until March 2009. The same was true when the Internet bubble popped, except hitting the actual bottom took even longer. Buying on the dips takes considerable guts because you really don’t know if the market has bottomed out or if you’re catching a falling knife. Advocates of technical analysis believe they can determine when the market has reached bottom, but no peer reviewed academic research exists to support their claims.

If you’re going to invest when the market declines you need to have uninvested cash. But if you are sitting on cash then you run the risk that the market will go up while you’re waiting on the sidelines. On average the stock market increases over time, which means it’s usually a bad decision to be out of the market.

To reinforce this idea, let’s look at some extreme-but-illustrative examples of how much it could have cost an investor to miss some key days of surging prices. In the table below, JP Morgan Asset Management evaluated the performance of the S&P 500 over 20 years from December 31, 1993 to December 31, 2013 which represents more than 5,000 days during which the markets were open. If you stayed invested the entire time, a $10,000 investment would have multiplied to $58,332 – a 9.2% annual return. 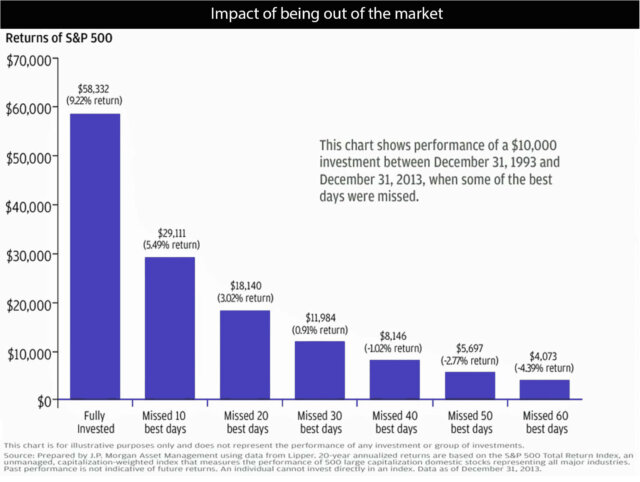 However if you were not invested during the 10 best performing days (which equates to less than 1/500th of the total time) the total value of your portfolio would have dropped to $29,111, wiping out almost exactly half of the returns you would have seen if you stayed the course over those 20 years.

If you missed the 40 best days (less than 1% of the 20-year time period), your 9.2% average annual gain would have converted into a loss of $854. So the takeaway is patience and staying invested for the long term are crucial for the greatest long-term benefit. This applies to any interpretation of a dip, from waiting for “down day” to waiting for a “decline of X%.”

Many investors believe they can predict when markets are going to crash. Further, many believe they can determine when markets are at a temporary peak so they can cash out, lock in profits, and avoid the market downturn. Even if an investor can withdraw before a market downturn, she will still face the challenge of market timing when getting back in on the market (not to mention the taxes associated with cashing out).

What About a Diversified Portfolio?

You can try, but markets simply cannot be timed in any form. In fact if you could actually consistently time the market you’d probably be running one of the world’s most successful hedge funds. So instead of trying to time markets or worry about the best time to make a deposit, you should focus on the three things within your investing control that can make a difference on your outcome: maximizing diversification, minimizing fees and minimizing taxes.

All investing involves risk, including the possible loss of money you invest, and past performance does not guarantee future performance. Wealthfront Advisers and its affiliates rely on information from various sources believed to be reliable, including clients and third parties, but cannot guarantee the accuracy and completeness of that information. For more information, please visit www.wealthfront.com or see our Full Disclosure